Each ign gazebo instance has the ability to run with the --network-role flag. When the flag is present, the instance attempts to join a distributed simulation environment by utilizing ign-transport. Ign-transport is used to register and track available peers, as well as synchronize clock and state among multiple distributed environment participants.

Distributed environment participants can take one of the following roles.

The distribution of simulation work utilizes the concept of performers in order to set where physics simulation will occur. A performer is an additional annotation in an SDF file which marks each model that will be a performer. There can be 0 to N performers being simulated at an instance at a time. Each level can only be simulated by one secondary at a time, so performers in the same level are always in the same instance. If there are more levels active than instances, multiple levels will be allocated to each secondary.

Multiple ign gazebo executables are started on the same local area network, each with the --distributed flag set.

The primary instance will read several command line options to dictate its behavior.

The secondary instances will only read the role command line option

WARNING: Environment variables for distributed simulation configuration is deprecated in version 2.x.x of Ignition Gazebo. Please use the command-line options instead.

The primary instance will read several environment variables to dictate its behavior.

The secondary instances will only read the role environment variable

Once the ign gazebo instance is started, it will begin a process of discovering peers in the network. Each peer will send an announcement in the /announce topic when it joins or leaves the network, and also periodically sends a heartbeat on /heartbeat.

If at any time the primary or any secondaries leave the network, either intentionally (through shutdown) or unintentionally (segfault or network issues), then the rest of the simulation graph will get a signal and shut down safely.

There are two possible signals that can be received. The first is an intentional announcement from a network peer that it is shutting down. The second is when a peer fails to receive a heartbeat from another peer after a specified duration. Both of these signals will cause the termination of the simulation.

As simulation proceeds and performers move across levels, their affinities will be updated as part of the message sent on the /step topic in order to avoid duplicate levels across secondaries. The primary, on the other hand, keeps all performers loaded, but performs no physics simulation.

Stepping happens in 2 stages: the primary update and the secondaries update, according to the diagram below: 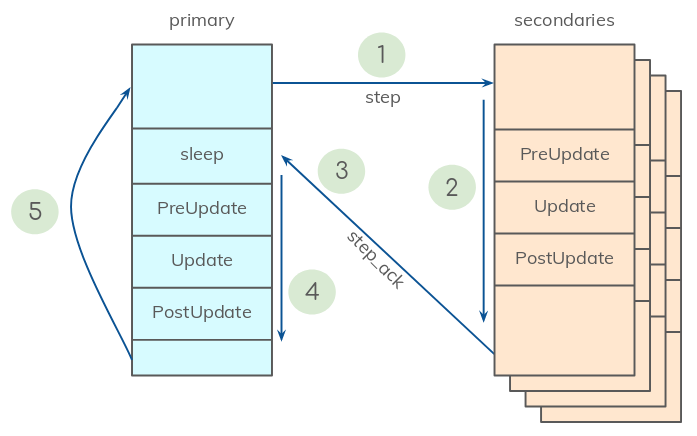 All interaction with the simulation environment should happen via the same topics that are used for non-distributed simulation, which should all be provided by the primary. Therefore, play/pause and GUI functionality all interact with the simulation primary instance, which in turn propagates the commands to the secondaries.